The Other Side Physical CD 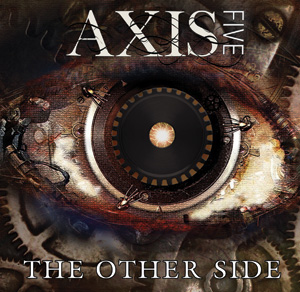 The Other Side T-Shirt 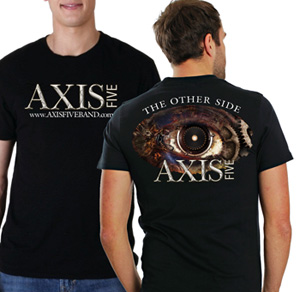 "The Other Side" album by AXIS Five official released by Mi5 / Universal Music Group is now available where you purchase music. "The Other Side" T-Shirts are also available. Purchase these below:

What The Reviews Say:

"The singer has a very agressive, original, and strong vocal arrangement. Very nicely done. Instrumentally, the accompaiment compliments the song superiorly. Lyrically, the songs have some gritty and punchy phrases. I love them they are very original. The songs are very indivual and sound great"

"The vocals are powerful and strong. I love the guitar solos. It makes me feel like im at a concert at night. Overall I thing that this album's lyrics are original and thought provoking. These artists are very creative!"

"The lead singer has a great voice for rock. His delivery is pure adrenaline."

"This would be a perfect album to skateboard to. Sounds bad-a**. Sounds like some of the songs off Tony Hawk's Underground for playstation. It is catchy and I would definitely love to hear it on on the radio."

"The mix of instruments is perfect with no instrument overpowering all the others. The balance is well chosen. Clear beginning, end and middle!"

"This artist sounds a lot like the band Soundgarden. The deeper metallic guitar gives this song a very catchy tone. This band plays as though theyve been doing it for years. The guitar solos in this entir album is pretty amazing. They had me hooked to this song since the very beginning."

"This rock is sick. The music is well put together. This man can sing! On top of this - very talented people in the background playing music. The music and words flow so good. This is a great album to listen to - I really do enjoy AXIS Five."

"Love the Album!! Seems like old rock and its very pleasing to the ears. Love the songs though very nice singing and instruments. I honestly would listen to this often whenever i'm about to hop on a video game or play a sport and just get pumped."

"That's what I like!! Strong vocals, the guitarists are doing a great job as well. My head started swaying straight away. When the album is getting to an end you're like 'I don't want this to end so fast' so you replay it again. And again. And one more time!"

"Cool electric guitar opens up this rock themed album. The instrumentals give it a classic rock sound, but the vocals make it absolutely awesome. I can picture a smoky bar room or strip club in the 90's playing these songs. The guitarist sounds like a true talent. The solo is amazing and is enhanced by drum beats that are equally talented. I feel this album is very well orchestrated. It seems to have been put together with a lot of forethought. Sounds like an instant classic!"

"The songs sound very unique and spiritual. I enjoy the unique use of instruments and the voice he has is so strong and athustastic. The words he sing makes sense and it doesn't sound like non sense."

"Is this Pearl Jam's younger brother?"

“The electric guitars are awesome in this album! DRUMS ARE SUPERIOR! The male vocalist has a great rock music voice and he has given justice to these songs extremely well. He has given music potential, and shows a lot of attitude in order to produce this great piece of work. The songs are pretty amazing and makes me want to bang my head. The guitar leads just blew my mind. You guys are awesome in performing. I have become your greatest fan. Keep up the great work and produce more great musics like this. I give this album a full 10 on 10”

“ I like how the album creates this strong, powerful atmosphere. You just feel like you want to sing along immediately. Vocals are forceful and firm making this a very energetic musical masterpiece."


“Nice electric guitars! These vocals are extremely nice! This sounds like a mid 90's song and quite strong. Vocals are very nice with the gritty throttled voice and added harmonies. Definite Alice in Chains influence here but it does have a more straight forward set up. I would check out these songs and go to evey concert I could!"

“The rhythm of the tracks pick the listener up into an overall rock-out vibe. The lyrics are simple and easy to sing along to. The album would receive a head bobbing audience!”

“The electric guitars are the hitter for this record, and the drums create this amazing melody that is a mix between funk and rock. The singer is a dude and his voice is incredible and the musicianship is top shop.”

“Really cool guitar riffs! The male vocalist has a very strong rock voice, and I found the album thoroughly enjoyable throughout. This was surprising as I normally wouldn't listen to this genre of music.”

“Great stuff! LOVE the rock voice. Band is tight and driving percussion got my toes tapping. The whole outfit seems to work well together. Competent riffs and lead solos blend well into the songs. Where do you guys play next?!"

“The drum beats are played extremely well, and almost seems complex but also simple at the time. The vocals are really cool, and the voice is crackly and filled with power. The backing vocals emphasize the main vocals by adding a few shouts here and there send shivers of extacy down my spine!”

“This album is wonderful. The tuning of the band was fabulous. I feel that this band is amazing. I loved the way the vocals are so powerful from beginning to end. The tunes are freeing and fun to listen to. Incredible lyrics.”

“The lead vocals slightly grizzled delivery of the lyrics is good for this rock genre, the backing vocals capture this style perfectly. A good album for the rock genre.”

“This heavier rock music is exciting. The production is good in that all the instruments are individually distinguished and sound andy are played very very well..”

"Thrilling and very powerful, vocals goe perfectly fitted with the songs. Electric guitars are remarkable! Bet they are great live!”

“This genre has never really interested the likes of many but WOW! This album says a lot for itself, lyrically it is insane, making it diverse for the viewers of any genre. This compilation has feeling in it which is mainly driven by the composition as it seems. The music, the vocals and mix are perfect.”

"This album has a good moral theme to it. A great album I will play again and again!”


“I love the sounds of the guitars and singer. Really hard and grunge is one of my favorites. I like the how powerful the lyrical words, and the texture of the singers vocals. I am into how well all the elements of this song mix together well. I think it would be great to hear while in concert or while working.”

“This album sounds great! The vocals and the beat are a very nice combination. I don't really like rock songs but this album is very good. I think many of these songs would be good to party to, or play video games to. The beats are strong and the vocals give the beat something to work off.”

Listen to the songs! Tell us what you think!!