AXIS Five is a band hailing from Virginia (United States) presenting the very best in new original rock music with a live high-energy show you’ll really get into. Each of the musically accomplished members of AXIS Five comes packed with decades of live performance experience, and thrives on getting the crowd up to a state of heart-pounding bliss. With over 200 live concerts performed, the band has the experience and professional know-how to create the perfect blend of music, technology, and action that will both touch and elate you and the crowd.

The band name, "AXIS Five" comes from two notions. The first is ties to a machine called the "Five-Axis" which turns and cuts materials on a 5-plane axis. Take a look at a video of the machine here. The second tie is to a Psychological test (the AXIS V) that measures psychological, social and occupational functioning. Read more about this test here.

Each of the band's four albums, "Memory Maker", "The Other Side", "EARTHLINGS" and "Spectacles" all are available for digital purchase where ever you buy music. The response to the new album "Spectacles" has been huge for the band!

The band's writing is immersed in current political, social and heart-felt subjects, and has a very distinct guitar-vocal-drum driven vibe. Rhyming lyrics that make perfect light of the rock-driven platform behind lead singer, songwriter, David Stanfill. There are over 200 world-wide digital media outlets serving up AXIS Five music goodness - so look for "AXIS Five" where ever you shop or stream your music!

Dave has been singing in bands such as Maximum Exposure and 90 Weight for over 20 years -in all kinds of crazy places in the Eastern U.S. "It's all about the fun for me when I scream in front of the crowd. My wife and daughter give me full throttle support in my musical endeavors... they are the biggest and brightest lights in my life. I want them to have the ride of their lives as we travel around the world together to new places and experience new people and their culture."

He touts that "...young years of piano lessons and composition along with an overdose of trumpet and music theory back in middle and high school taught me to breath and honed my ears with near perfect pitch. My Mother used to ask me what I wanted to be when I was young. There was only one answer... 'A ROCK STAR!' I spent my childhood and teenage years locked away writing rock songs and balads for hours with my synthesizers. There is so much more to come from AXIS Five, and I could not be prouder of us. Just wait - you'll see!"

David has been writing lyrics for songs for well over 30 years now. "I never would have guessed that all that time emmersing myself in music would lead me right here with these talented guys, writing together and performing our original music in front of an ever-growing crowd! THANK YOU to all current and future fans of AXIS Five - if not for you, this wild ride would not be happening!!"

"I love rock and roll music from the beginnings of it as blues became electrified to all the way to metal. My first concert was Kiss in 1977 in Roanoke. I was blown away. Marshalls and Gibsons cranked up and lots of theatrics. Roanoke was a real slow rock scene and luckily I got away to northeast Ohio and got exposed to all the good stuff in the late 70s and early 80s when rock was booming. Zeppelin, AC/DC, Nugent, Van Halen, Lynyrd Skynyrd, Zappa, Rush, Cars, Aerosmith, BOC, ZZ Top, Judas Priest, Def Leppard, and many more were there in concert... went in the military and got exposed to even more cool music. Heard GNR there. Then comes the 90s with all the kick ass bands... Tool, Drowning Pool, Godsmack, AIC, Sublime, Metallica. etc..."

Many moons ago LG picked up a guitar and never looked back. The sounds of Eric Clapton and Jimmy Page taught him to feel, to create and the sounds of Satriani, Vai and Eric Johnson inspired him to search.

Growing up in NY, he began his musical pursuits around age 11. After 4 years of woodshedding he found his first band-a jazz/blues project. That became a great outlet for discovery and creation. During his service tenure in the USMC a point was made to always have a guitar by his side.

Upon moving to VA, LG immediately tested the waters of the scene joining a band called The Bounty Hunter. He craved more than classic rock and country so he sought elsewhere and decided to move on. Grunge was beginning to hit.

In 1993 Load began it's journey with a two night set opening for local hero's The Mosaics. The band went on to bigger things including a CD and several great opportunities. At the end of 96, the steam had run out. Since then he has been involved in many musical projects and earned an Audio Engineering degree from The SAE Nashville. Finally LG landed with AXIS Five and a great bunch of guys eager to not only bring well known music, but to create a voice and a style that they can call our own.

"Thanks to God, my Family and my Friends for standing beside me and guiding me". Lg Stillwell

Jasons music playing started at an early age with drums at about five years of age. His true talent came to light on his 10th birthday with the gift of his first guitar. He started then and has not put it down since. He did the typical garage band thing through his teens and progressed to the bar scene. "What great fun - the 80's - lots of hair and metal... everyone wants to be a rock-star!"

In his 30's Jason moved to Virginia, and started performing one man acoustic shows, and fell in love with the vibe; but longed for the driving beat of a full band. After playing with several bands, he found the perfect group of guys and formed AXIS Five.

His gear consists of Gibson, Dean, Ibanez, ESP, Epiphone, TC Electronic, Bugera, Bogner, Black Star, Line 6, Shure. His endorsements include PHAT Guitars and 5150 Rockwear. He gets his tone from nothing but tube driven amps. "... love the tubes!"

He would like to thank God for his talent, his family for the time and the members of AXIS Five for the chance to do what he loves, ROCK! Now are you ready for AXIS Five? 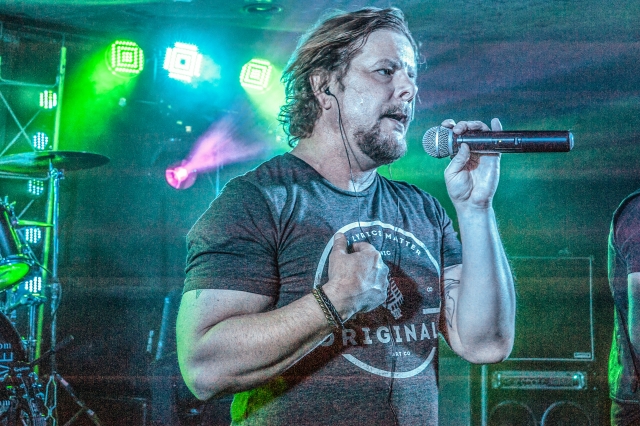 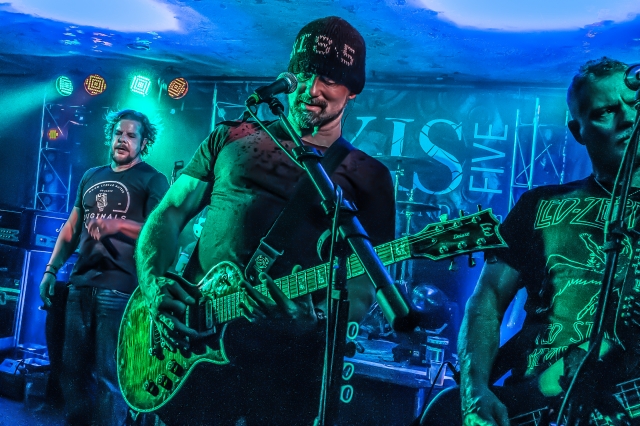 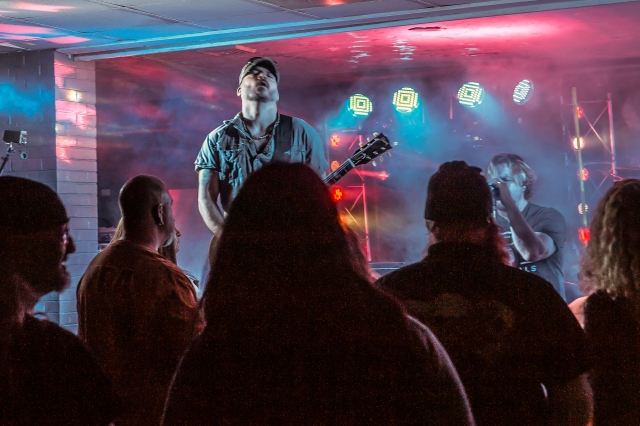 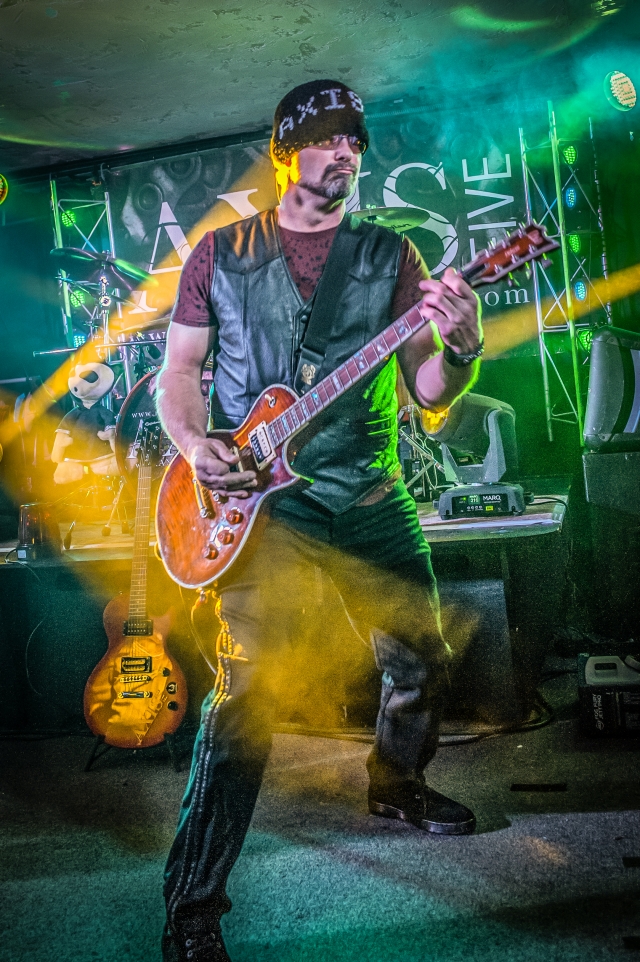 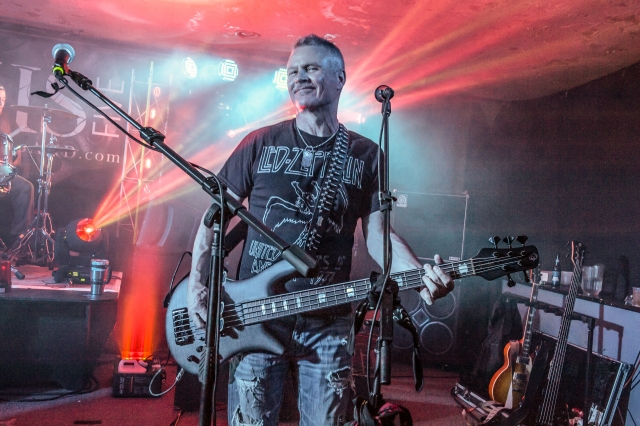 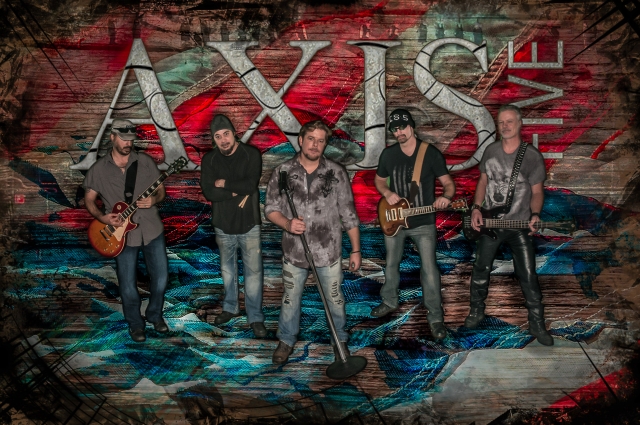 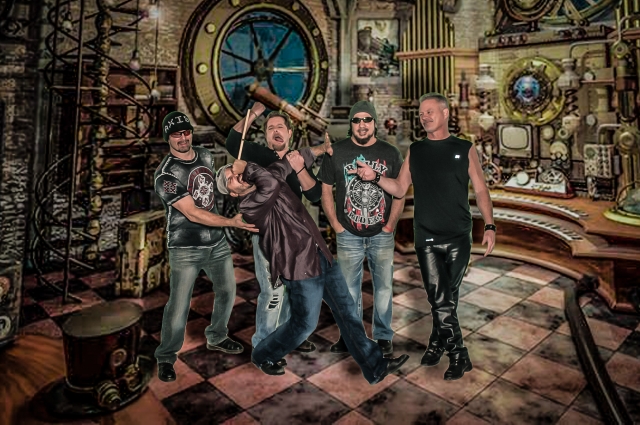 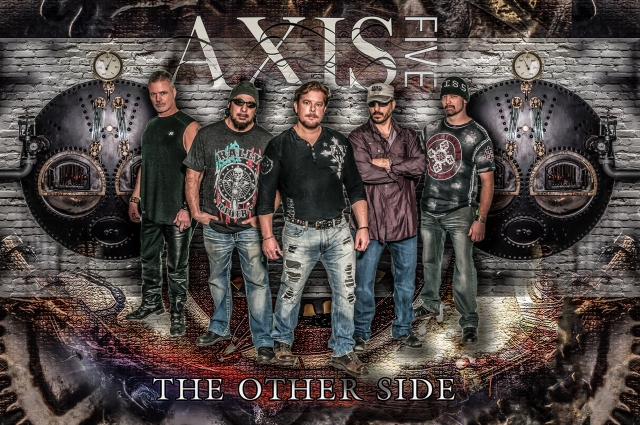 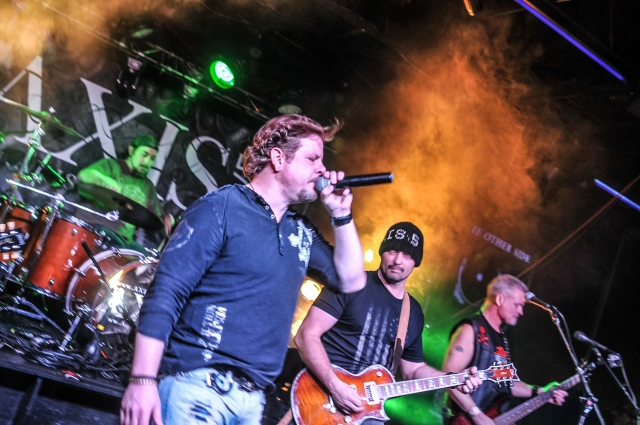